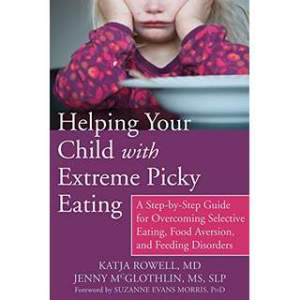 For my 40th birthday last year, my Aunt Carol got me a kick-ass Eeyore coffee mug and the book Helping Your Child with Extreme Picky Eating: A Step-by-Step Guide for Overcoming Selective Eating, Food Aversion, and Feeding Disorders. I finished it a couple of months back, and have been meaning to write about what I learned from this book.

I learned that I don’t have an extreme picky eater.

Seriously. Cassie eats more than 15 foods. She has no physical problems with eating. She may have sensory issues that play into her food choices. (We’re trying to get her evaluated for sensory issues right now, but that’s been an uphill battle.) The book really doesn’t help with strategies for parents of kids who, for no apparent reason or because of sensory issues, do not eat many different types of food. It focuses a lot on kids who have oral motor issues, who have had feeding tubes, or who have other medical challenges related to feeding.

I should have realized, when they said that high fructose corn syrup was no worse than sugar, that this book may not have been all that was promised to me. No food should be off limits. Dessert should be served with dinner, not as a reward for eating dinner. So say the authors.

I suppose, if I were dealing with a child with a real feeding disorder, where getting any food into the child is considered a victory, that strategy would work. But I’m not dealing with a real feeding disorder. Cassie clearly chooses the foods she will and will not eat. She will like a food just fine one day, and declare she hates it the next. There is a core group of foods that she will always eat. There is a much larger group of foods that she will always not eat. Then, there are the few foods that are always up in the air.

The book listed some reasons why parents may feel like they need to address picky eating. My reason was not on the list. Their list included:

So, Cassie doesn’t have anxiety or discomfort around food. At this point, I don’t much care what other people think. As the foods she eats are perfectly acceptable to most people, I can’t see why she would be teased for eating them. She’s growing just fine – 75th-90th percentile. I’m pretty sure she doesn’t have any real nutritional deficiencies. My main concern, and I’m sorry, because this really is too much information, is that Cassie wasn’t pooping properly, and that was hurting her, physically. We have mostly solved that problem by having her drink a Naked Juice smoothie with every meal that doesn’t include fruits or vegetables that she eats. And that’s almost every meal, because the only fruit she will always eat is olives and she will only eat vegetables in soup. She used to eat carrots, heavily dipped in ranch dressing, but she hasn’t eaten them in a long while.

The book’s main point is that parents decide when and what kids will eat, but the kids decide how much they will eat. The secondary point is that eating shouldn’t be a power struggle. So, offer at least one “safe food” at every meal, but don’t go out of your way to prepare special meals, and don’t barter with your child or try to force her to eat anything.

There were a few useful nuggets of information for our family. It was also rather nice to know that, when it comes to picky eaters, we don’t have anywhere near the worst imaginable.

If anyone reading this would like to borrow my copy of the book, you’re very welcome to. If you have a child who eats less than about 15 foods, or medical issues around feeding, I do recommend that you read this book, perhaps even buy it. But, if your kid has just decided that she doesn’t like most foods, but will eat some foods, this book is probably not for you.