A friend of mine shared the following picture on Facebook.* 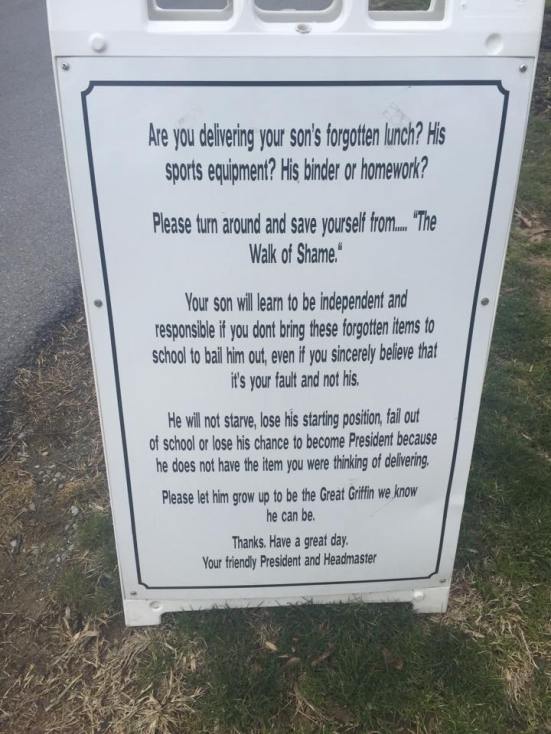 Are you delivering your son’s forgotten lunch? His sports equipment? His binder or homework?

Please turn around and save yourself from… “The Walk of Shame.”

Your son will learn to be independent and responsible if you dont [sic] bring these forgotten items to school to bail him out, even if you sincerely believe that it’s your fault and not his.

He will not starve, lose his starting position, fail out of school or lose his chance to become President because he does not have the item you were thinking of delivering.

Please let him grow up to be the Great Griffin [I assume that’s the school mascot] we know he can be.

My initial reaction was immediate dislike. Who among us hasn’t forgotten something we need? And what do we do when that happens? We ask people to help. I forgot an address I needed. I called my husband, he read it to me. My aunt left her credit card at a restaurant. She called me, I fetched it for her, and sent it down to Coronado. I have lost track of how many things my family and I have left at my friend Christy’s and how many things my friend Annemarie’s family has left here.  Yet, we always return the items to their rightful owners, sometimes very early in the morning or very late at night if those items are critical to near-term plans.

Because we’re not douchebags.

My written response to the photo was “What happened to ‘do unto others as you would have them do unto you’?”

Let me pause here to note: If a child is always forgetting one thing or another, then allowing natural consequences to occur is a valid choice. I also said that in my response.

I was met with the attitude that bringing items to our children constitutes babying them, and we need to teach our kids independence.

But when I see this sign, I see it encouraging parents to be spiteful. No, one can’t always be dropping everything to attend to one’s child’s every mistake. One can, however, teach graciousness and compassion by being considerate to one’s child, as one might be to a friend or co-worker who has forgotten something important.

I don’t see anything shameful in bringing my child her lunch. In fact, one of the reasons we left Cassie’s previous school was that we had forgotten her lunch, they didn’t call us to tell us, and they gave her food she wouldn’t eat – and they knew she wouldn’t eat it when they gave it to her. I worked from home, which they also knew, so I could have brought it, if I knew we had forgotten it. It was not my 3-year old daughter’s fault her lunch had been forgotten, and she should not have had to suffer the consequence.

I don’t see anything shameful in bringing my son his homework, his helmet, or his hat. We all forget things sometimes, and we feel better when we know we can rely on someone to help us when that happens.

I also feel that the sign is hypocritical. I know in our family, Jackson and Cassie rarely forget things. It’s Max and I who do the forgetting. Cassie is usually the one who reminds us what we’ve forgotten.

Believe me, I’m big on natural consequences, but I see the message conveyed in this sign as a shortcoming in society today.

No, the child likely won’t starve (although the amount of food available to a child might not be adequate). The child might not lose face and his political aspirations probably don’t hinge on whether he turns in his California History homework. But having the love and support of parents is incredibly important. Knowing that your mom or dad has your back is important. When mom or dad says, “You know, I could bring you this thing you need, but I’m not going to because you need to learn not to forget things, even though you rarely forget anything,” that’s just a douchebag thing to do.

Again, I’m not talking about a child who routinely forgets things. (Although I would argue that there are better ways to teach organization and responsibility.) Nor am I saying mom or dad should always be available – sometimes we’re simply not. If Jackson or Cassie forgets something on a Thursday, they’re SOL, because that’s our day in the office.

But if we’re working from home, and we see Cassie’s lunch box on the counter, one of us is going to bring it to school for her. It’s 20 minutes out of the day, and it ensures that she has what she likes to eat for lunch, which makes her a happier child.

Will a child learn to be independent if you don’t provide him with the things he’s forgotten? Maybe. But I think it’s just as likely that he’ll learn that he doesn’t have to go out of his way to help others either. In short, he’ll learn to be a douchebag.

* It was not his picture, but someone else’s, who stated this sign was in the carpool lane at a school.

4 thoughts on “How to Raise a Douchebag”