We never intended to have another cat.

When we moved to California, my wonderful, compassionate, lovable Katchoo died. Sassy remained, and, over time, became a loving, huggable kitty too. But Sassy did not like other cats. We had a kitten, Giles, for four short months (he died of FIP). Sassy had hated Katchoo, and she really hated Giles. No, we would be a one cat family.

Our neighbors had 13 cats, or something like that. They had rescued a pregnant stray, and kept her, and the kittens, and then one of the kittens had a litter before she could be spayed. We were one of the few houses on the street without dogs, so the cats liked to spend time in our backyard. That was fine with us. Jackson loved to watch all the cats. In fact, his third word was “cat” and it was directed to a particular cat who loved watching Jackson at the sliding glass door. That cat was Jinxy.

Our neighbors decided that they could not properly care for 13+ cats. Some of the kittens could be placed, but the older cats – and by “older”, I mean about 2-years old – would be harder to place. I convinced my husband that we should take Jinxy, and she would be an outdoor cat. She’d never come inside, just into the garage at night during the winter.

The first winter, she did come into the garage at night. I started opening the laundry room door, so she could come just a little bit inside. At some point, it was very rainy, so I would let her in the downstairs, blocked by baby gates, so she could dry off. By the time the next winter rolled around, she was an indoor/outdoor cat. Sassy hated her, but Sassy stayed primarily upstairs, and Jinxy downstairs, so it all worked out.

After Cassie was born, we tried to make Jinxy an entirely indoor cat. She started peeing on everything. We gave up. She was an indoor/outdoor cat once more.

When we found our new place, we realized that the cats would have to be indoor-only. We live right next to a major road – a highway, in fact. We were very concerned that Jinxy would not make the transition well. 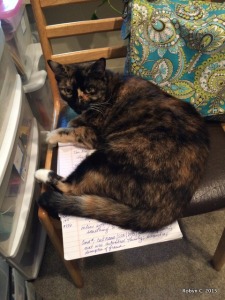 Instead, she handled it like a boss. She started hanging out with the family more, demanding love and pets. When I worked from home, she laid down on a dining room chair next to my desk chair. If my hand ever strayed from typing, she was up and meowing, saying, “If you’re not going to be using that hand for anything else – PET ME!” She would head butt me while using the mouse. She also chewed through a mouse cord and my external hard drive power cord. But all she wanted was love. And to be loud. Very very loud. People on conference calls would ask, “Does someone have a baby?” and I would have to sheepishly say, “That’s my cat. Sorry.” “That’s a cat?!?”

Yeah. That was Jinxy.

This weekend, she followed Cassie and me into the bathroom and demanded her usual pets and love. Cassie said she was being annoying, but I said Jinxy just wanted love, so I pet her.

About five minutes later, I was eating breakfast and I heard a blood curdling scream. Jinxy was in front of the puzzle bookcase in the dining room. She was lying on her side, seized up. She appeared to be choking. I tried to see if there was anything in her mouth, but I couldn’t see anything. I got up to call the vet – who I knew wouldn’t be there due to the holiday weekend. Max went over to pet Jinxy and see if he could do anything. By the time I found my phone, Max quietly told me, “Robyn, she’s not breathing.”

I had to call the emergency vet. I explained what happened. She said it sounded like a stroke, or maybe a heart attack.

Jinxy was born on July 5, 2005. She would have been 10-years old in less than two months. Other than a bad case of fleas (which ironically happened after she became an indoor cat) she had never been sick. Oh, she once got into a fight and a wound got infected, but that barely counts. The point is, she seemed to be the picture of health.

Technically, Jinxy was Jackson’s cat. He initially took her death very hard, and he’s still saddened by it, but he’s doing all right. Cassie doesn’t understand where Jinxy is. She doesn’t really get that “dead” means that she won’t see Jinxy again. Max and I are just stunned.

It is quieter without Jinxy here. Firefly doesn’t seem to be concerned in the least over the disappearance of her lifetime companion (and competitor for food and affection). It’s going to be very strange, not having her here next to me all day. 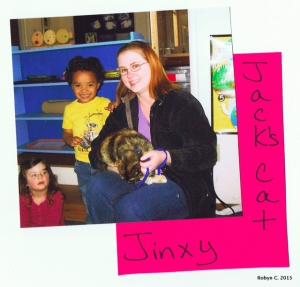 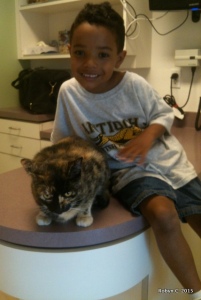 August 2012: Jinxy and Jackson at the vet 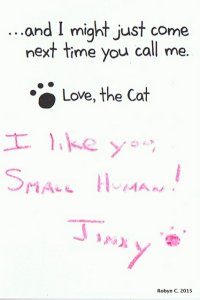