Last year, I made a note of a CNN article, “We’re a culture, not a costume.” I meant to write about it before Halloween, but I forgot. Luckily (?), this year, similar discussions are going on concerning Halloween costumes and racism.

This is my take on some of the costumes that have been denounced as racist. I would love to know what you think. 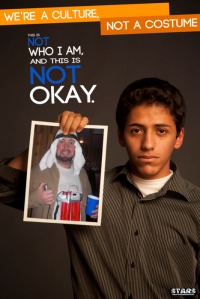 This is guy dressed up as an Arab suicide bomber. This is not OK. It perpetuates a stereotype, as well as makes light of the fact that suicide bomb attacks are still happening everyday. 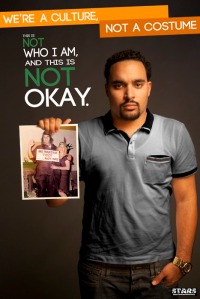 If you look closely, you see that the people in this picture are dressed in stereotypical Native American dress, with war paint, and that the man is carrying a sign that reads, “Me Wantum Piece, Not War.” The sign is not OK. It implies that Native Americans are stupid, among other things. However, I don’t see a problem with people dressing up in actual traditional Native American garb, regardless of whether or not they are Native American. 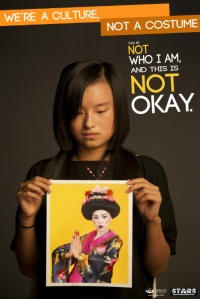 Finally, please, call me crazy, but I like this costume: 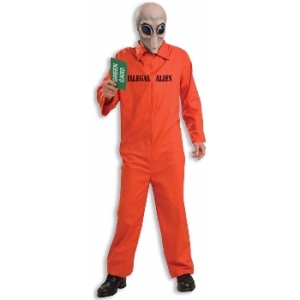 Why? Because it pokes fun at the stereotype, not the stereotypee. I don’t like the term “illegal alien.” We’re all people. Except that guy, he clearly isn’t a person. He’s an actual alien. Clearly, that’s what an illegal alien is. Not this: 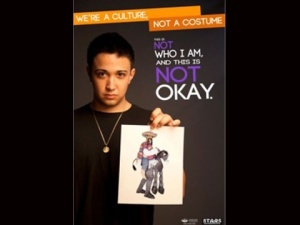 That is my take on racist Halloween costumes. I could be totally wrong. Tell me I am. Or tell me you agree with me. Or tell me what you and your kids are for Halloween. Just tell me something!

(Cute pictures of my kids in their very much not racist Halloween costumes will be posted Friday.)

(And all of the “We’re a Culture, Not a Costume” images are copyright Ohio University’s STARS Program.)