Note: This post is in no way meant to be critical of my cousin Jessica, her new husband, or their families. I love Jessica, and Andrew seems to be a great guy, and specifically, a great guy for her. This post really isn’t about them. Like most posts on this blog, it’s about my kids and me. 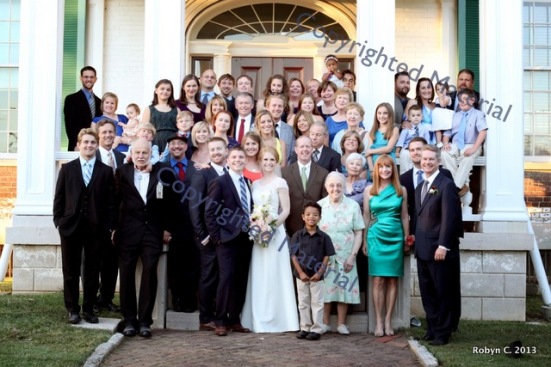 For whatever reason, I’m in the 4th row, in the middle. Max is in the last row – he married into the family, so he’s tall. But I bet I don’t have to tell you where Cassie and Jackson are. True, Jackson is front and center, in front of the bride, in fact. And Cassie is popped up there in the back. But even without the prominent placement, they’re pretty easy to pick out from this crowd.

My family is very white.

On my dad’s side, my cousin Vern’s wife is Native American, and that’s it.

On my mom’s side, so far all of my cousins have married white people.

I have five unmarried cousins left.

I think my cousin Dan is contractually obligated to marry a Jewish woman. (Both of his older sisters married Jewish men.) Besides, he lives in Rhode Island, which is not a hot bed of diversity. At the time of the wedding, my cousin Nick was dating someone who appeared white, but I don’t know if he’s dating her now. My cousin Tyler is still dating his apparently white girlfriend. My cousin Sandy doesn’t appear to have a significant other. My cousin Jake is still in high school.

So basically, it’s up to Sandy and Jake, and maybe Nick and Tyler, to find some spouses of color. Get on that guys!

OK, I’m mostly joking. The point I’m actually trying to make here is that it is important for children who were adopted transracially (or even kids of color who are being raised by a bio parent who is a different color) to see and interact with people who are the same color that they are. I know to Jackson, it was very important that his baby sister be brown like him. And while my family may look a cast picture for The Sound of Music, Max’s family is a little more colorful, and we have friends of different colors and ethnicities.

Even as recently as the 80s, adoptive parents didn’t realize that love wasn’t enough. You do have to talk about race, racism, and prejudice. You do have to make sure your children have role models of their own heritage. You do have to be cognizant of the history of people of color in America. It’s a lot to think about.

3 thoughts on “A New Meaning Behind the Title “White Wedding””