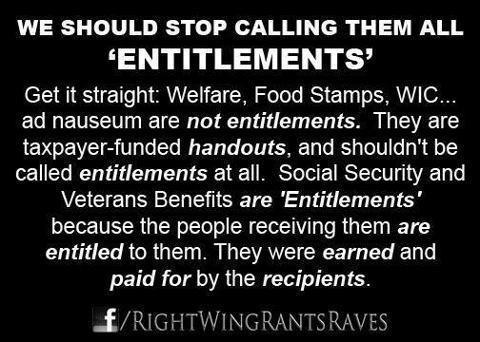 Several people, including two from ACA II, “liked” the post. I couldn’t resist. I posted, “Just so you know, my family was on food stamps last year.” with a link to my blog post.

JZ: I know a lot of people on food stamps past and present, This was not what this post was about.

Me: But it is. The text degrades recipients of “welfare.” People who are on “welfare” are very much entitled to be fed and to have medical care. Many people on “welfare” have paid into this system, without which, as many as 15% of Americans could starve. I’m all for Veterans’ benefits, and I do believe that people who have paid into Social Security should ultimately get Social Security. But then, that’s what “welfare” and public schools and libraries are all about too. We all pay into these systems, institutions, whatever you want to call them. WIC and Food Stamps are no more handouts than Social Security is.

JZ: SS is something you pay into. How do we pay into WIC and food stamps?

Me: When you pay your taxes, some of it goes into WIC, Food Stamps, our schools, libraries, fire departments… anything public.

Right now, the elderly are getting our money – yours and mine. Because we pay Social Security taxes.

By the time we retire, Social Security won’t exist anymore, at least, not in its present form.

JZ: That’s all true, as is this post. I just dont believe that aid was meant to be a way of life. Its there to help in time of need and it is abused. Good night

Random Person I Don’t Know: I received food stamps for a short time…i’m not offended by the post. Think I’ll share it.

First, she tried to dig herself out by saying she wasn’t trying to insult me, as well as every other person dependent on social welfare programs (aka “welfare”). I don’t really care what she thought she was doing, or that the one person who was on Food Stamps wasn’t offended.* The fact was, she was saying: “People on welfare don’t deserve to eat.”

That’s what it boils down to. People on welfare aren’t entitled to what taxpayers give them. Never mind that people who are on “welfare” pay taxes too.**

Then, she claims ignorance to how we pay into social welfare programs. The same way we pay for schools – like our school, the public charter school we both send our kids to – through taxes. Rich people who send their kids to private school pay taxes to support our school. The elderly and people without any kids currently in school pay taxes to support our school. I know a lot of them complain about it too. Does that mean we should be grateful that they pay their taxes so our kids get an education? Does it mean we should give them a pass and let them pay only into programs that they think are more acceptable?

Finally, she plays the “welfare shouldn’t be a way of life” card. My cousin Mike played that one too. You know what? That’s all well and good. Welfare shouldn’t be a way of life. The problem is, people who say that think that the people on welfare are lazy; they’re unemployed because they don’t want to work. It couldn’t possibly be because access to a quality education is largely dependent on your income and race. It couldn’t be because every time the words “budget cuts” are uttered, education gets cut, Head Start gets cut, and child care funding gets cut. It couldn’t be because unemployment is rampant, and college graduates are having a hard time finding work, so if you’ve only got a high school diploma, or worse, never even graduated from high school, you’re screwed. But then, maybe the uneducated don’t deserve to eat either.

Wal-Mart employs 1% of Americans. Wal-Mart keeps its wages low, so its employees need $2.66 billion in government help every year. These are employed people. The CEO of Wal-Mart makes more in 1 hour than most Wal-Mart employees make in an entire year. But he can’t pay his employees enough to cover the cost of their own food.

These are not lazy people. These are people who needed help from programs like Head Start. Who needed good teachers in good schools, but who got crap.

Which leads me to Jesus.

I do not remember the part in the Bible where Jesus says, “Screw the poor.”

I do not remember the part where he says, “OK, let’s take care of the poor, but not if they’re going to be poor for their entire lives.” In fact, I’m pretty sure that in Jesus’s time, when people were poor, they stayed poor. Kind of like now. Only then, it was because there were caste systems and social strata that had to be maintained. Public education didn’t exist. Medical care didn’t exist, so the sick were really screwed. They stayed sick, and they died, and their families suffered. Today, people stay poor because public education is woefully underfunded. (And only the lucky, rich, and very poor get health care.)

I do not remember the part where Jesus says, “OK, let’s take care of the poor, but let’s make them jump through hoops to get the help, and then, let’s make them feel really, really guilty for needing help.”

I remember him saying, “Blessed are the poor.” Specifically, he said, “Blessed are you poor, for yours is the Kingdom of God.” (Luke 6:21) and he goes on to say, “But woe to you who are rich, for you have received your full consolation; Woe to you who are full, for you shall hunger.” And then he says, “Give to everyone who asks of you… [b]e merciful, just as your Father is merciful.” (All in Luke 6.)

Why did I bring Jesus into it at all? Because the original poster is Catholic. It is always the Christians*** who scorn the people on “welfare” even though it was these people whom Jesus was said to have loved the most.

Let’s remember for a moment that Jesus was an unemployed carpenter. He ate because other people gave him food. If he were alive today, he would qualify for Food Stamps. And because of the prevailing attitude of society , he would have to use them.

* I’m sure there’s at least one Black American out there who’s not offended when White people compare Black people to monkeys either.

4 thoughts on “Jesus and Food Stamps”